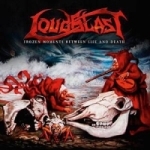 French Death Metal veterans LOUDBLAST strike again and with such powerful blast that most new bands should run and hide or better yet learn a thing or two from undisputed masters of European Death Metal. And no, I’m not French, hehe. See, LOUDBLAST had a very bad luck in the 90s with the labels, plus the first two full length albums “Sensorial Treatment” and “Disincarnate” were a bit chaotic because of the drummer who couldn’t do real justice to the band, but after solving that problem they recoded a 3rd album “Sublime Dementia” (1993) which is a masterpiece that could stand shoulder to shoulder between DEATH “Human” and PESTILENCE “Testimony Of The Ancients”. Yeah, I did my homework while also playing the new album “Frozen Moments Between Life And Death” everyday for a week and this one is a damn grower! It is so refreshing to finally hear a release which is not “retro” or just pro-tooled to death. LOUDBLAST made a record which incorporates all their long experience, playing deadly Metal and sees them naturally progressing. It means that you actually get heavy songs, not just fast sewn-together tracks and those songs have a lot going on in them – from mid-paced to slow and very fast parts, extremely good solos and melodies, riffs that don’t tear you apart straight away, but rather subtly crawl under the skin and slowly infect your whole being creating this dark, timeless universe which you are sucked in. The opener ‘Frozen Moments Between Life And Death’ is such an example of crushingly heavy riffs, dynamic tempo changes and melodies that are dark and natural or even tripped out. Other standouts for me are ‘Emptiness Cruches My Soul’, ‘Towards Oneness’, ‘Nosce Te Ipsum’, the anthemic ‘Hazardous Magic’ and the progressive instrumental closer ‘To Bury An Empire’. The sound quality (courtesy of Peter Tatgren at Abyss Studios) is top-notch, every instrument is perfectly audible, the drummer seamlessly switches between groovy playing to fast attacks or mid-paced pummeling, driving the whole LOUDBLAST train forward. The vocals are not your typical growls, but rather gruff and nasty, sometimes reminding me of GOREFEST’s Jan-Chris de Koeyer. Listening to this new LOUDBLAST opus you can’t shake a feeling that this band should be much bigger than they are, for this is how interesting yet powerful Death Metal should sound in 2011. If you like DEATH, ALCHEMIST, VOIVOD, PESTILENCE (when they were good), “Frozen Moments Between Life And Death” is a must buy album, period! www.myspace.com/loudblast