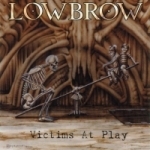 Allen West has turned into some very busy guy ever since his OBITUARY days… After he’s been constantly writing and playing with SIX FEET UNDER for a while, he immediately formed another project called LOWBROW, together with former NASTY SAVAGE members Curt Beeson (drums) and Ben Meyer (lead guitar). The line-up was completed by Scott Carino on bass (who toured with DEATH a few years ago) and ex-OBITUARY roadie Rich Hornberger on vocals. Their debut album “Victims At Play” features 11 really cool old school Death Metal tracks that are musically very close to SIX FEET UNDER / OBITUARY. So, if you consider yourself a die hard fan of Allen’s playing style, you shouldn’t hesitate for a second to get yourself a copy of this as well. Cause despite the factor of unoriginality, it’s a quite solid record, reasonably well produced by ex-OBITUARY bandmate Donald Tardy in the famous Morrisound studios. I just hope that Ben Meyer’s input in the songwriting will increase a bit more in the future, cause the result could sound a lot more interesting and unique. Too bad that the cover / packaging is rather poor and the playing time, that your CD player is gonna present you, a fake. From the 58:21 minutes you’ll have to take away approx. 15 minutes of silence between track #11 and the following 1:05min long silly secret bonus track. Verrrry funny… Latest news: Scott Carino is no longer a member of LOWBROW. He was replaced after the recordings of the CD by ex – NASTY SAVAGE / AGENT STEEL / GARDY-LOO fourstringer Richard Bateman!