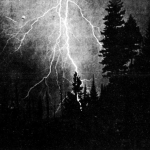 "Atmospheric Black Metal without modern elements" – this self-description could replace the whole review. But of course there are some more words required. First up the name LUBBERT DAS. A mixture of (in terms of linguistics) a German definite article and a proper name. I spent quite some days thinking about the deeper meaning unless I searched the internet. The origin of the band’s name goes back to a painting by Hieronymus Bosch called "Cutting the Stone", from around 1494. LUBBERT DAS are, like the famous painter, hailing from the Netherlands, so the connection seems more than obvious. The mentioned painting is, like others works of Bosch, pretty obscure and more than interesting, during the last 500 years it has been fascinating countless people. But back to the dutch trio. Originally "Deluge" was released on tape, limited to 100 copies, a follow-up of the band’s first release, a demo-tape called "Keye". But obviously Dunkelheit Produktionen realized the quality and now the two songs are released as CD digipack. At first listening I was surprised by the sound, because it is really blurred, you really have to keep an ear to recognize guitars, drums and the vocals in this sonic hodgepodge. But after two or three rounds I really was in the mood to enjoy the gloomy and dark atmosphere. I even go this far to claim with a more cleaner or polished sound "Deluge" would simply loose its black spirit. Sometimes I had to think of a band like LUNAR AURORA, which also used this kind of very special sound. Another fact that speaks for this release – the change between slower and mid-tempo parts is very organic, it just happens without a conspicuous break. So if you like getting lost in a black and dark, not melancholic nor grim atmosphere without being molested by elements like keyboards, half a dozen vocal styles and guitar hero soling, you may add LUBBERT DAS to your card. But beware! No easy listening here, but profoundly crafted Black Metal. http://lubbertdas.bandcamp.com, www.dunkelheit-produktionen.de