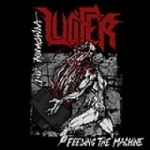 Lithuanian Thrash Metal with slight Death Metal influences (mainly vocal-wise though). Need some for yourself too, perhaps? Then look no further because these 5 fellows in LUCIFER, bring you some tastefully done Thrash Metal on their latest 3-track demo, titled "Feeding The Machine". The guys’ playing is tight and amazingly aggressive even, obeying some Bay Area styled aesthetics with some very riff-based and melodic lead guitar work. There’s a slight modern touch within their thrashing assaults on the demo, so LUCIFER ain’t completely 100% pure old school Thrash Metal act by any means. Thomas’ rough growling vocal parts also tend to add an extra spoonful of heaviness to the band’s overall heavy enough soundscape, which is a good thing. However, what he could do in the future though, is to try to get more variation for his vocal delivery (like a couple of screams wouldn’t do any harm, I think), just to make their stuff stand out even more because on this particular demo in question, he simply sounds a bit monotonous. I just said, ‘a bit’, so please don’t put too much emphasis on this, okay? Other than that, no further complaints about LUCIFER’s "Feeding The Machine" demo. Straightforward and aggressive Thrash Metal has always appealed Yours Truly anyway – and LUCIFER’s demo doesn’t make an exception. This stuff succeeded in kicking some serious ass. To contact LUCIFER, simply sneak yourself into the following page: www.reverbnation.com/luciferthrash