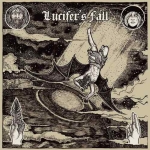 I do like my CANDLEMASS, just as well as the Australians in LUCIFER’S FALL like theirs. The band is a quite new entity, just ready with their first full length on Hammerheart Records. 7 slabs of traditional Doom Metal, greatly inspired by the atmosphere and delivery of the Swedish masters of Epic Doom. That written, LUCIFER’S FALL do have a presence of their own, they deliever mesmerizing tunes driven by a dark and melancholic guitar melody, back up by percussive rhythm patterns and an amazing vocal performace, it all seems fragile and about tipping over into a too sorrowful world, but the band keeps the balance and energize the music when needed, that topped with a great vocal performance. Good old traditional Doom is on the rise, and for us that have ‘banged to PENTAGRAM, SAINT VITUS, THE OBSESSED, CANDLEMASS and the likes for quite some years, it is great news, as the genre has something to offer, a lot of other genres don’t. Driven on emotion, darkness, melancholy and almost frail in its expression, often ending out in a beautiful output. Great to have new bands contending for the old guys’ throne. On top of this album the new PENTAGRAM album "Curious Volume" has also just been released, yet a great effort from Liebling and Griffin. Where the American tradition is a bit more Rock’n’Roll, the Epic Doom tradtion that LUCIFER’S FALL follows are a bit more ‘quiet’ in its output, and a tad more gripping as the invoked atmosphere really does its work really well. Just check out the track ‘Sinner’s Fate’ that embraces what the Australians can and do, daaamn! And do yourself the favor and drop by LUCIFER’S FALL’s Bandcamp site and give their demos a listen, a lot more raw and Rock’n’Roll attitude they come up with there, on their way to the sound they have now, the atmosphere and melancholy are present, great stuff! Jump into the well of souls: www.facebook.com/lucifersfalldoom, https://lucifersfall.bandcamp.com, www.hammerheart.com