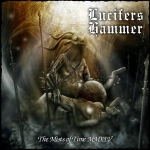 It reeks of evil and obscure underground Metal… it reeks of something like it could make you deadly curious of them even. Yep, indeed it does. Michigan’s underground Black / Death Metal horde LUCIFER’S HAMMER started out back in 1986 already, released 4 demos and 2 full-lengths when terrorizing the Christian community with their blasphemous and unholy metallic attacks for years, ’til disbanding in 2004 for good. Now, ten years later, it’s good to see some of their stuff getting a re-release treatment – much thanks to a starting label like Destro Records for understanding the hidden potentiality of this somewhat obscure US Black / Death Metal act. LUCIFER’S HAMMER’s debut album, "The Mist Of Time", originally released in 1997, added with some bonus tracks taken from the band’s 1992 demo titled "The Burning Church", have now come to the dark light again, being re-released under the title "The Mists Of Time MMXIV". This band is one of those long lost gems from the extreme US underground scene that somehow managed to slip through my radar back in the day, me even not noticing LUCIFER’S HAMMER ever existed. With the help of some spoken female voices, Gregorian like chanting, keyboards, ominous acoustic guitar parts and stuff, this stuff indeed is pretty out of ordinary yet even kinda mysterious sounding, building up this certain all things evil radiating aura all around them. In fact, they do have a very similar effect on me when I heard LESTREGUS NOSFERATUS for the first time; this Atlanta, Georgia based Black / Death Metal act that released 4 demos in between 1988-95. Very much akin to LESTREGUS NOSFERATUS, also LUCIFER’S HAMMER’s sound was very powerful, menacing and simply captivating. I think I never grow tired of listening a song like ‘Phantom Spirit’, which has something really magnetic evil to it. It’s just so sinister, dark and yet so powerful sounding, right from the start to the last chalk lines. And the same words can also be used for a song called ‘Celestial Vision’, in which a poor listener is sunk into the blackest pits of hell right off the bat, without any warning alarms ringing beforehand. It’s time to burn a little bit baby…! Also, LUCIFER’S HAMMER did a great cover version for BATHORY’s ‘Enter The Eternal Fire’ on their debut album; actually paying incredibly much homage to the original version of the song. As for the bonus songs, taken from the band’s 2nd demo, "The Burning Church". On that particular demo, they sounded naturally much rawer, more straightforward and like a band that was still searching their own identity and sound. To me, they reminded me of a bit of SADISTIC INTENT and Finland’s ABHORRENCE here and there, which cannot be a bad thing by any means, I suppose. Lastly, I just wanna say it’s a really cool thing that there are labels like this Destro Records or Dark Descent, that truly do understand the importance of getting some of these rare extreme underground gems re-released again, getting them available even for those people that missed the heydays of the golden underground tape trading scene totally; the times before the internet. More about this somewhat legendary Michigan underground Black / Death Metal outfit can be found at: www.myspace.com/lucifershammer, label: www.destrorecords.com