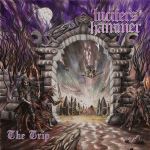 New music from these Chilean Heavy Metallers do make me excited. I got hooked on the band, when Shadow Kingdom Records did a casette release of their demo “Night Sacrifice” in 2014, a year after the band released the demo originally. A couple of years after that release, LUCIFER’S HAMMER released their debut album “Night’s Omen”, an album that kicked tremendous arse. What a debut! In 2018 they released their second effort, and now we have the third album “The Trip” ready to enter our lives! LUCIFER’S HAMMER delivers Heavy Metal with a healthy dose of NWOBHM over it, some epic parts and a tad doominess here and there. The songwriting is quite good, catchy and straight forward, drenched in atmosphere, great guitar parts and hooking rhythms. The vocals on top are spot on, present, powerful with a solid range. The band isn’t trying to reinvent anything, they have found their place in classic Heavy Metal and delivers that spot on, why make it any harder than it is… Even though it takes quite some skills to craft as catchy and solid songs as LUCIFER’S HAMMER does! Epic Heavy Metal with a doomy feel here and there, some IRON MAIDEN guitar worship and just great energy and intensity. If you like Heavy Metal this will make you rock, and if you haven’t checked out these guys yet, get to it! More info at: www.facebook.com/lucifershammerband, www.facebook.com/hrrecords