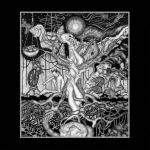 I can’t begin to tell you how many times I’ve listened to “Gates Of Nocticula” from 1996, especially the track ‘Ancient His Majesty…’. It’s been a steady listen since when I first discovered Black Metal, and has no chance of ever leaving the rotation. So it’s nice to see LUCIFUGUM are still consistently going strong with a new album, “Anaphora Lithu Actinism”, their 18th full-length. That’s right… 18. If only other bands would be this productive. Consisting of Khlyst on vocals and Stabaath on guitar and bass, there’s no decline in inspiration after all this time. Bear with me on the song titles, I don’t speak Russian. Otherwise, the opening track ‘Парад пепла’ is a tribal, screeching invitation to join the band as they traipse into ‘Эклиптика отделения’, a blurry, fuzz-filled stomp with a mid-paced beat and phlegm-encrusted vocals. ‘Гравий душелома (Нательная душа)’, with it’s ladder-like guitars (which any LUCIFUGUM fan should be able to recognize), protrudes like a bloody thorn which has recently pricked its victim. ‘Акростихия’ crackles and radiates as ‘Дуга рефлексии’ is a blitzkrieg of abomination and recklessness. The guitars slither, the drums keep an unsteady rhythm and the vocals growl and wheeze. ‘Иконотопье’ shifts its shape at a moment’s notice until the final track ‘Кенотаф разума’ ends with a Black Metal fury that defies the lord of hell below. LUCIFUGUM are always an enjoyable listen. They’re just different enough to set them apart from the average bands in their genre, which may be the reason they’re lasted so long. I look forward to the next 18 albums in their career. For more info, check out https://lucifugum.bandcamp.com