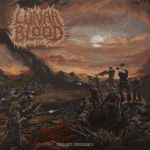 Let’s be honest… After looking at New Jersey’s LUNAR BLOOD band photo, they look like just a bunch of dudes. No evil smirks. No leather or spikes. Mainly dressed in bluejeans or shorts. Just… dudes. But goddamn… After listening to their debut album “Twilight Insurgency”, hell, after listening to the first 10 seconds… this band has the sound of urgency, aggression and integrity that is much appreciated in the world of Black / Death Metal. WOODLAND TOMB’s Nick Zwiren (guitars), Mark Guiliano (guitars), Seth Kaplan (bass) and Chris Ward (drums) have joined forces with vocalist Jake Kruger to rip our insides out with the devastating energy of their music. From the opening guitars of ‘Purified Rot’, the blasting drums and blitzkrieg vocals kick ass reminiscent of ANTICHRIST SIEGE MACHINE, which is a topmost compliment. The production fits the music tremendously, catching the drum breakdowns in all their immensity. ‘The Hammer’ is a riveting, fast-paced monster of a track that’s sure to have the moshing crowd destroy the venue when played live. Two songs in and I’m already having that nervous moment, praying, hoping that the band doesn’t fuck the album up. And aside from unnecessary movie samples at the beginning of the songs, the album smashes throughout. ‘Gastrointestinal Industrial Complex’ is another table tipper. And what a fucking song title! The fourth track ‘Ululating In The Depths’ is mainly atmospheric that sweeps into ‘Wrath March’, another rapid song that bleeds and tears its way through our minds in ways medieval torturers couldn’t even imagine. ‘Parliament Of Trees’ (a Swamp Thing reference?) chugs and whorls before the floors collapse by the pure force of the aggressiveness. ‘Gnawed’ slows down the pace some, giving us a breather before erupting into a more classic Metal riff with ‘God Of The Trainwreck’, another great title. ‘Pig Hunter’ ends the almost 30 minute album with a damn satisfying flurry of Metal animosity. So… to sum it all up. These so-called ‘dudes’ can fucking light the world on fire. These ‘dudes’ can rip our esophagus out through our mouths with little effort. These ‘dudes’ simply fucking kick ass. I fear for anyone or anything standing in our way when we crank this shit up. Hail LUNAR BLOOD!!!!! For more info, check out www.facebook.com/lunarbloodnj, www.facebook.com/pulverisedrecords