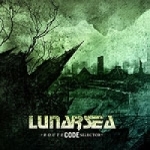 This record serves Scandinavian melodic Death Metal, but created in Italy. Normally Italy is well-known for their cheesy symphonic Metal bands, so I was curious about this release. I didn’t know the band before and did not receive any information about them either, so I started a little research in the worldwide web. The band was founded in 2003 and has released two demos and in 2006 their debut “Hydrodynamic Wave”. After that they had to overcome some line-up changes. The new singer Angelo Musmeci joined them before this record but Alessio Colonna, who played the drums on “Route Code Selector”, is replaced by Stuart Franzoni now. The music is, as written above, typical Scandinavian melodic Death Metal with all its trademarks. So we have catchy riffs, melodic guitar lines and solos, sometimes accompanied by keyboards. The vocals of the songs are well growled by the new singer, accompanied by some clean vocals from bassist Christian Antolini, which are sometimes a little too much pop for my taste. I really like the first track ‘Magnitude 9.6’. This song is a great start but unfortunately the band couldn’t keep this level over the whole record. So in the end it is not a bad record just nothing special and if you are a collector of melodic Death Metal you can buy this one and have fun. Otherwise you can wait for the new DARK TRANQUILLITY record which will be released next year. For more info check out www.lunarsea.eu, www.myspace.com/lunarseaband