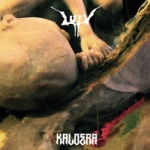 LURK is an extremely underrated band, the pick of the lot from the recent or not so recent bunch of Totalrust Music releases – its self-titled debut album was a landmark album and there was nothing quite like it. Yes, the style is Sludge / Doom / Death with dabs of a blackened atmosphere but it’s quite unlike say, HIGHGATE or FLESHPRESS, which come close in their own way. LURK like UNHOLY, is trying to create a form of Doom on its own, regardless of the conventions. They’re mixing it up so well, it’s hard to distinguish the influences – it’s like a coagulated mass of metal, hitting at you, making you bleed. There’s physical torment, mental anguish but nothing from the looks of it. On the face of it, it’s probably your standard Sludge / Doom band, or something close to Death / Doom with only the higher throaty vocals standing out in a way that the ROOT vocalist stood out, but nowadays that’s a good thing – anything that stands out. There’s the early MY DYING BRIDE touches, EYEHATEGOD sludginess, the more evolved Sludge contemporaries as parallels in their own way, pillars taking this style of music forward, each bearing its own weight, giving the genre its own foundation. The riffing is thick, but having depth, meaning and it’s not an endless and boring repetition – there’s catchy riffing akin to PYRAMIDO, concrete Sludge / Doom and there’s the atmospheric elements à la FLESHPRESS as well. This is something that’s so well executed, it’s just immersive like quicksand. I’ve lost count of the number of times I’ve heard this one and the debut, both landmark albums in this style, not quite appreciated – but the future will decide their worth. LURK impresses once again with a worthy follow-up album “Kaldera”. www.facebook.com/lurkdoom, www.doomentia.com