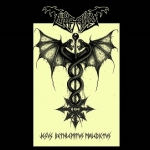 Australian warriors LUSTRATION are active in the underground since 2008 and return now with their second full-length “Jesus Bethlemitus Maledictus” and a renewed line-up. The presented seven tracks show the band in a really good and creative shape. Their style is a mixture of old school Death / Black Metal in the vein of POSSESSED, SARCOFAGO and CELTIC FROST with influences of classic 80s Thrash like SODOM or even early SEPULTURA. There is not much info to find about the band, just that their style is described as raw and primitive. I surely can confirm that their style is raw and sounds simple at first glance but listening to the material more detailed shows some really fine and elaborated guitar melodies hidden between the raw rhythm guitars and the hellish and partly distorted grunts. The battery intentionally was kept simple but is powerful enough to create a strong and diabolical soundwall together with the remaining instruments. The songwriting is raw but the listener can hear that the involved musicians are no newcomers and exactly know what they are doing. The production is also raw but far better than a lot of bands choose, playing a similar style and fortunately the album does not sound like a horrible garage recording. Recommended track from my side is ‘Fading Lights Of Atlantis’ which really is an outstanding track of the album and a good taster to check the band. In case you want to start the new year with some ass-kicking old school tunes, check the band out at the following locations: www.facebook.com/pages/lustration/58980944458, www.forgottenwisdomprod.com