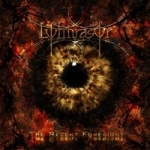 Never heard of this band before. They come from Germany and this is actually their second album. The first band that comes to my mind when listening to this is BELPHEGOR. The style is quite similar, a fast and heavy mixture of Death and Black Metal, with a very polished production… yes, quite too much of a polished production. Oh, and some slight industrial or electronic touches to it. It is weird as some riffs and parts almost sound like you can dance to them, while some others sound way too much industrial, yet being brutal all the way. Then they also add a lot of interludes to their music (like piano) which makes it all interesting. But then, I just felt something was missing. The drums sound way too synthetic and perfect, and I hate that. It takes away the human factor which makes music more enjoyable. Do not ask me why, but sometimes when a recording is more direct, and not that Pro-Tools, it sounds better. Production aside, I also feel they abuse a bit of the fast bass drumming in parts. That makes you go like “Haven’t I heard that part a few songs ago?”. While nowadays with all those computers doing wonders, it is hard to tell if they are good musicians, I suppose they are, but then again it sounds way too much “processed”. Sounds like space age brutal Metal or something. Some parts with more normal use of keyboards sounded to me like CRADLE OF FILTH, although less symphonic. There you go. It is not a bad album, but for my tastes it is way too modern sounding, has too many keyboards and it all sounds very much alike. Their previous album is actually very similar, although has a dirtier production and might be more enjoyable for that. www.lyfthrasyr.com, www.twilight-vertrieb.de