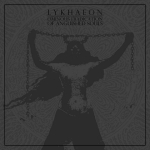 LYKHAEON hail from Zürich, Switzerland, and perform some chthonic Black Metal, some of the same streets I wandered trying in vain to locate the TRYPTIKON bunker as an uncultured Aussie tourist years ago. There are a few newer bands coming out of the current Swiss scene like DEATHCULT that have shown promise, but this is the first I’ve heard of the group. "Ominous Eradication Of Anguished Souls“ is their second release to date, which is in their words, “an exploration of the long forgotten souls, who’s sinister fate lies buried below… Revealed at long last and hidden no more.” Right. The three-piece present two songs to the listener, ‘Chthonios I’ and ‘Chthonios II’ spanning just over 25 minutes. Just like the names suggest, this is subterranean music, dense and stifling with the stench of decay. While the songs are lengthy, the band manages to keep things interesting as the song structures are unorthodox with twists and turns throughout. There are the bestial elements present, the band weaves in some sparser sections in which things slow down, and the vocals take precedence. The band takes advantage of the reverb-drenched engineering, and the howls, whispers, shrieks and cries of what I imagine are different characters in the narrative sound fantastic. This isn’t a KING DIAMOND release, but I appreciate what LYKHAEON are trying to do. Given the concept of "Ominous Eradication Of Anguished Souls", they do an admirable job at convincing the listener that something abhorrent lingers beyond the realm of death. There’s a dualism between Switzerland and bands like LYKHAEON. The rolling green pastures, snow-capped peaks and countless sees are wonderous, tranquil and idyllic, not something you’d associate with this filth. Death is the leveller, it is universal and inescapable, and with beauty comes darkness. More info at: www.facebook.com/lykhaeon, www.godzovwar.com