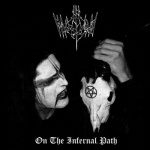 This album is a self-released album released in 2013 by the Hungarian Black Metal band MABTHERA, and now re-released by the Russian label Dark East Productions on a limited CD-run. We are getting 8 tracks of traditional Black Metal, well delivered with a dark and cold ambience to it. There is nothing over the top about this album, just solid Black Metal with the base in the Scandinavian Black Metal scene, mid-nineties and forward. Just take a track like ‘Ivadék’, that would make the grim guys of TULUS proud. The trio does quite good and has written some listenable and quite catchy songs, for it being Black Metal that is. They are following their inspirational sources quite well, and do seldomly introduce anything surprising. That said the songs are well-written and the music well-performed and the atmosphere is almost as dark and evil as desired. A bit more eerieness and dark mysticism, concerning the atmosphere would suit the music well though, the production is a tad too clean and polished for my taste, some more rawness would have suited most of the music. "On The Infernal Path" does actually invoke a bit nostalgia, I can’t help dreaming me back to the good old days, when I first started to learn about the more melodic side of Swedish and Norwegian Black Metal, as there are a good deal of such elements on this album, together with a bit of the grey melancholic dreaming Black Metal the German scene hailed. Though nothing does of course beat the originals, still, this album ain’t that bad as a gateway to the days that once were, and it grows with each listen. MABTHERA might be interesting to follow in the future. More information at: www.facebook.com/mabthera.band, http://darkeastproductions.weebly.com