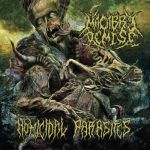 Sometimes research on an album that has to be reviewed can spoil any anticipation. What have I found out about MACABRE DEMISE? It’s a one man band from deepest Bavaria, Germany, which consists of Andreas Rieger, the same guy who runs the record company who released the album. In addition he also has two more bands running in which he’s the only member. With such information in advance, it doesn’t even help that MACABRE DEMISE is praised as brutal Death Metal. This CD compiles the first two releases of this project, the EP “Dead Eyes” and the album “Stench Of Death”, from 2010 resp. 2011. And the stuff on this compilation finally ruins the last tiny hope for an interesting album completely. The songs from “Dead Eyes” are a perfect example for non-brutal Death Metal. These six songs sound sterile with nearly antiseptic guitars and all too dominant clinical (machine) drums. Too awful to waste more breath on it. Thankfully the album sounds better, yet the sound is still sterile, but the drums are mixed into the background a little more. Thus the bigger problem that remains is the boring music that still wants to be brutal but in fact isn’t. The ten songs are too compelled and not really organic in their composition. Just like some computer analysed some CANNIBAL CORPSE albums and created songs out of the results. After not even 50 minutes of listening, my already damn low expectations are not even fulfilled, thus I can only judge the CD as a waste of natural resources. In case you still aren’t deterred, visit: www.facebook.com/pages/macabre-demise/100994066628059, label contacts: www.facebook.com/pages/rebirth-the-metal-productions/189575314416992 or www.satanath.com