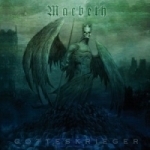 MACBETH is known as the first Metal band of the GDR and was originally founded in 1985. Now, after their self-titled debut in 2006, the new record “Gotteskrieger” was released. The CD version is done by Massacre Records and the record, which we are talking about in this review, comes from High Roller Records. The music is pure Heavy Metal with a lot influences from the Thrash Metal genre. The songs are technically impeccable with powerful Thrash riffs, driving double-bass drums and highlighted with excellent guitar solos. Nothing to nag about. The lyrics are completely in German and hard Metal with German lyrics is still something special. Sometimes they are too embarrassing or with too much pathos but MACBETH didn’t turn in this trap. I miss some really catchy refrains but this is a personal opinion. There are two songs that should be marked a little bit more. On one hand ‘Das Boot’, which includes parts of the original score theme released by Mr Klaus Doldinger himself and on the other hand ‘Maikäfer Flieg’, which is a nursery rhyme from the time of the Thirty Years’ War. So you get a good and interesting record with a great production. And as every time High Roller Records treat an excellent vinyl version with gatefold cover, which includes all the lyrics and is limited to 500 copies. www.myspace.com/abendmahl, www.macbeth-music.de