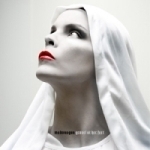 This 6-piece French outfit MADONAGUN was originally founded in 2005 by D.K. (aka Thorgon) and Mark (aka Sagoth), who both are ex – members of ANTAEUS and also current members in ETERNAL MAJESTY. But it was actually during the year 2007, when things really started happening for MADONAGUN. Besides the brothers of D.K. and Mark, nowadays the band line-up of MANONAGUN has also been shaped up around Nack (AWACKS) on keybords, Julien Damotte and Voron (ARGENTUM MORI) on guitars and Mattjö (ex – SCARRED) on vocals. The band’s debut full-length studio album, titled "Grovel At Her Feet", is actually kinda tough nut to break. I mean, MADONAGUN seem to fuse quite many different (Metal) styles into one big musical mishmash of theirs; it all sounds very progressive, dark, experimental, hostile, angst-filled, etc., making it kinda tough to pinpoint what this stuff is truly all about. Progressive Extreme Metal? I don’t know. The musical Metal style could also be of so many other things; it basically depends on the ears of each individual listener at the end of the day; the experience that each of us has gained within different styles of Metal music over the years. There’s like 50% clean vocals and 50% growled vocal parts on this record also, and I guess the purpose of using two different vocal styles is to add more different moods to the songs. Well, sure "Grovel At Her Feet" is loaded with different moods and atmospheres, but for some reason this album really doesn’t click in me at all. Somehow – as the pale truth appears to be with MADONAGUN, this record left sort of a slightly annoying artsy-craftsy impression on me that the guys have tried way too hard by pushing the envelope in the name of uniqueness than it was originally needed in the first place. "Grovel At Her Feet" has its moments, no doubts. For example a song called ‘Stairway To Hell’ starts out violently great but when those clean vocals come along, they ruin the song’s aggressive and maliciously storming mood for good. Unfortunately those tiny, hopeful moments for something better, just ain’t enough this time to make my day. More at: www.madonagun.com label: www.greatdanerecs.com