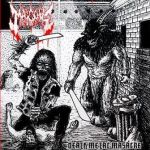 This is the second full length album from this Death Metal squad from Mexico. Their earlier material was “vomited” in English but for this one they decided to do it in their native Spanish. Well, I guess it is no big thing as the monstrous growls sound quite similar, but there is something that is so fascinating while spewing pus and blood in Spanish. Back to the music, this is a great form of Death Metal, very much inspired by AUTOPSY, old CARCASS, some BOLT THROWER and a touch of evil Thrash in the 80s SLAYER / KREATOR sound. Yes, there is nothing original to be found here, but then again we don’t want that. If your band is named MAGGOTS you just want to hear the sound of decomposition and pus making the brain to explode, and that ladies an gentlemen is exactly what these fine cannibals are able to conjure. There are some very subtle Black Metal touches here and there, but just to add a bit more flavor to the rancid decay we are exposed here. The overall sound is not that far away from THE CHASM and certainly they have some juicy (yet infectious) riffs like in the album’s title track. The production values are also on the right spot, perfectly exhumed and consumed with the right amount of rawness and putrid stench. After a few listenings for you aural decay and displeasure, this album grows and more maggots infest your brain. On all this pile of bones, one can hear that the band is quite riff orientated, they do have twisted melodies in their sound, yet so vile and disgusting but at the same time sour-sweet that will definitely melt the flesh from some skulls in the way. Their slower parts have a CANNIBAL CORPSE – esque approach, but they never lose the grip of doing music. They never get lost in brutality just for the sake of brutality. No, there is always an exquisite finesse that elegant brain-eaters do possess. Of corpse there are some parts that are totally worshipping early DEATH, and oh, the memories, the smell of putrefaction and the sense of gasping for air are there. A killer release, a band to keep an eye, but beware of your eye popping out of your cranium. www.facebook.com/maggots.mx, www.facebook.com/terrorstrikesrecords-125560617849053