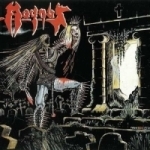 Originally released on CD in 1992 through the Polish label Digiton Records now officially released for the first time on vinyl through Blood Harvest Records comes this Death / Thrash jewel from the Polish chains & leather freaks MAGNUS. As far as I know Reaper Metal Records re-released “Scarlet Slaughterer” on CD, but I have no further information about that at all. That’s basically the only negative issue here as there is no information or biography added to this record. I enjoy it a lot if on re-releases like this liner notes from bandmembers and some introducing words from an insider are written down. This is not the case here, so what! Looking at the photo on the inner sleeve and on the backside of the cover you see that MAGNUS were huge fans of nails, chains, bulletbelts and leather and it suits them well. The coverpainting is awesome, too, and brings back great memories from times where the coverpaintings weren’t professional paintings like they are nowadays mostly. The whole layout looks like this record is an old one from the 80s and that’s great! Musically you get 12 songs of Death / Thrash Metal as it was played at the end of the eighties and beginning of the nineties. You can hear a lot of similarities to the early recordings of SEPULTURA in my opinion; after all it’s quite chaotic Death / Thrash Metal with overall pretty amazing musical skills and cool vocals. Some of you probably will complain about the sporadic high pitched screams in the vein of mid-eighties American Power Metal in songs as e. g. ‘Scarlet Slaughterer’ or in the beginning of the first track on the LP called ‘Trash Attack’, on the other hand this sounds quite unique and if you listened to the songs a few times it suits them pretty well. To speak the truth, MAGNUS didn’t play the ordinary Thrash or Death Metal and still sound quite unique even today with plenty of cool ideas, just take a listen to the great ‘Man Condemned’ with it’s acoustic guitar harmonies in the middle of the song. Well, this is not the average Thrash or Death Metal release here, this could be something for all old school Metalfans who still enjoy the first releases of bands as SEPULTURA, DESTRUCTION, KREATOR or even the Polish IMPERATOR the most. Check this “first time ever on vinyl” out if you are into the above mentioned bands as this record could be something for you. I didn’t know MAGNUS before and can now declare that I missed something over the years. Check out www.bloodharvest.se for ordering details!