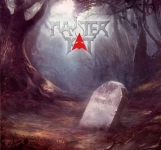 MAJSTER KAT from Slovakia are active since 2001 and "Memento…" is the second album, the debut "Sväta Zvrhlost" was released seven years ago, quite a time ago. The reason for this rather slow-paced approach is unknown to me, but it does not effect the music. To the contrary, this album is by no means a rush job or rapid shot, it is well composed, I guess the five guys spent very much time in the rehearsal room working on their songs. About he music itself, well if you take a look at the band’s pictures you will notice (amongst others) band-shirts of TESTAMENT, MERCYFUL FATE, CORONER and KRYPTOR, so this may give you hint what to expect. Thrash Metal with classic Heavy Metal influences and sing-along choruses. For me personally the up-tempo parts are the more enjoyable ones, although I must admit that the slower or mid-tempo parts are perfectly fitting within the context of the whole release. And, like I wrote above, the songwriting is pretty excellent and the realization well done, despite the sound could be a bit more punchy. But that is criticism on a high level. Some other aspect I do not like about “Memento…” is the recurring acoustic guitar. Maybe the guys have listened too often to ‘Nothing Else Matters’. Talking of METALLICA, another influence of MAJSTER KAT seems to be ‘Kill ’em All’, not the worst reference. www.majsterkat.sk, www.facebook.com/majsterkat