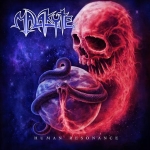 This Australian Thrash Metal machine was formed back in 2010, and what we have here is their debut album after a few EPs and some singles. The band name that comes more to my mind is TANKARD with a few touches of KREATOR and more than a few references to old Hardcore. The first thing that one must notice is the vocals. High pitched screams is the name of the game, and it is the kind of vocalist that is a love or hate thing. The production values are quite good, the guitars sound very heavy and the drums have an organic feeling. And the band knows how to play fast but at the same time knows when to add some melody and some very well played parts like in the song ‘Zero Hour’. Although there might be a reference to modern Thrash Metal bands like MUNICIPAL WASTE or WARBRINGER, make no mistake, MALAKYTE has a sound of their own, it is less party Thrash type, and has some riffs that recalls EXODUS’ best times with some very clever twin guitar duos in the best IRON MAIDEN tradition, and a very good bass and drum performance. Sometimes it reminds me of bands like NUM SKULL or DEMOLITION HAMMER. Usually I will despise any Thrash Metal album released nowadays, yes even from the bands I once worshipped, as it has all become a tragic remembrance of what they were, and many of the bands trying to do a revival, end up making a joke of what Thrash Metal was supposed to be, but in this case MALAKYTE are doing a very good job in making Thrash Metal again. At the end, only the vocals stops me from enjoying this more, but I am sure things will be better in the future. www.malakyteband.com, www.facebook.com/malakyteband