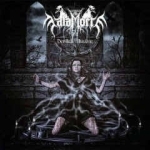 “Devilish Illusions” is MALAMORTE’s debut full length album and was released back in late March of this year. The band was actually categorized as Black / Heavy Metal which therefore made me think of something similar to BEWITCHED but unfortunately this was not the case. MALAMORTE are what is to me a pure 2nd wave Black Metal band conveying the clichés of goatees, camouflage pants and combat boots instead of denim, leather and spikes. Anyways, to generally sum up this record one can expect a very digitally and cold sounding production which is even enhanced by the use of programmed drums, varied songwriting and some weird sci-fi intro and outro tracks. The intro sounds rather like something out of Forbidden World instead of cold and grim Nordic landscapes, which I assume was something MALAMORTE wanted to achieve but I don’t see the connection to the rest of the record there. The first real track ‘Devilish Illusions’ attacks the listener with classic 2nd wave Black Metal mixed with a nice doomy middle part. ‘Pactum’ continues with a slow intro that turns into an evil sounding verse-riff which I really like. Towards the end the track gets very atmospheric by adding lots of keys. Besides the first verse which is something I’d like to call half-assed Thrash Metal the fourth track ‘Dark Clouds On Golgotha’ is the highlight of the record. Stomping drums and a catchy chorus always work fine with me. Why MALAMORTE added these childish sounding bell-noises entitled ‘Maleficium II’ is something I don’t understand but I guess this is another story. ‘Possesion’ continues where ‘Dark Clouds…’ started by opening up with a very heavy riff. The rest of the track is quite ok but nothing I really could worship like a maniac. ‘Malamorte’ is again not really my cup of tea but has a nice piano part included which is quite eerie sounding. ‘Devoted To Self Destruction’ all of a sudden sounds very Punk compared to the rest of the record. A bass intro and scrubbing guitars all the way. The last real track again delivers some more standard Black Metal without any big surprises. As mentioned above, MALAMORTE really have included a lot of ideas which makes the songs very diverse but I’m just not the right person for this kind of music. People who feel the same will therefore not need this record but all Black Metal, camo pants and goatee enthusiasts should definitely give it a try. www.facebook.com/malamorte-1549227968623731, http://malamorte.wixsite.com/malamorte, www.satanath.com