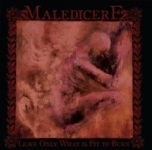 MALEDICERE
Leave Only What Is Fit To Burn
(Antitheist Disseminations)
59:54min

Yet a band from Minneapolis to lighten up the Christmas, well, a band more realistic to rip it apart and pound it to dust. This is MALEDICERE’s debut full length after a couple of demo releases, a split, a live release and a split. "Leave Only What Is Fit To Burn" is a album that is reinventing tracks written from 2006 – 2008 with a full band, as put by the band itself. We are getting a slap of misanthropic and hateful Black Metal with this release. The composition of the songs is the brilliant part here, MALEDICERE has their way with the songwriting that makes the music quite interesting and gripping. When the listening first have commenced, it’s hard to get out of the band’s grip again. MALEDICERE is quite fond of making long tracks, and it works, I often become bored with longer tracks, though in this case they keep on progressing with unforeseen twists and turns, without loosing the flow and conquering brutality. One should think Antitheist Disseminations was my label, as I’ve just praised four releases on it, though it isn’t, though it must be a man with the same soul and aesthetics in Metal as my own that runs the label. As said four releases have taken me with my guards down, and haven’t given me a reason to raise them again. MALEDICERE is yet a band to check out, as their intelligent and progressive, yet raw and brutal, Black Metal release, that combines cold and blazing melodies with brutality, haunting atmospheres and a solid and exciting rhythm section, is well made Black Metal with an edge. Enter the blaze at: www.maledicere.org, www.maledicere.bandcamp.com, www.antitheistcult.com