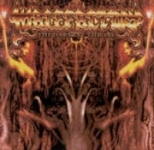 Out of the four releases that we recently received from Brazil’s Demise Records, this one’s definitely the most professional one and therefore I wouldn’t be surprised at all to see MALEFACTOR’s next release already issued by a bigger, more established company, like Nuclear Blast or Century Media. The band was formed back in 1991, ever since released two demo tapes and furthermore appeared on two Brazilian compilation albums (“The Winds Of A New Millennium Act II” and “Dois Da Bahia”) until they finally got picked up by Megahard Records for the recordings of their debut album “Celebrate Thy War” in 1999. Well, as I never heard any of those releases, I need to focus on this new eight track effort, which delivers a nicely balanced mixture of brutality, melody and atmosphere. MALEFACTOR come up with a pretty good production, combining brutal riffing with moody, atmospheric keyboards and almost folklore like acoustical parts. Surprisingly they have two keyboard player in their line-up, but never sound wimpy because of that! Their main focus seems to be to achieve an overall majestic yet very brutal approach. Their lead vocals are in the vein of DIMMU BORGIR and the likes (which means very raw, but neither shrieky nor in the deep death grunting vein), but they also add a clean, kinda heroic sounding singing to the songs every now and then as well, which fits their songwriting extremely good. The musical abilities of each member is highly impressive and if you’re open minded enough to tolerate music next to CANNIBAL CORPSE or DARKTHRONE, make sure to check this out. Good one! Contact: Demise Records, P.O. Box 325, Timoteo / MG, 35180-000 – Brazil, www.demiserecords.com