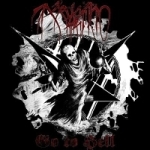 According to their myspace page, they are "The band with the world record in demo recordings. Based on alcohol!", a fact that could be easily true. Formed in 1990 and after 18 demo tapes and one full length, they just released their second album, "Go To Hell", through Apollon Records. And this being my first listen to the band, I am impressed. MALEFICIO is one of those Swedish bands that decided to stay away from the "classic" Swedeath sound and come up with their own style. Starting with the simplistic, yet effective cover artwork, they dwell between sheer brutality and melodic tinged Death Metal. "Go To Hell" reminded me of NAGLFAR’s "Vittra", sans the high pitched screams. Covering a vast array of styles, the track ‘Searching For Death’, is a great example. It starts off with a brutal blast beat part that instantly reminded me of DISSECTION. Right after the verses and chorus, there is a great groovy section and a tasty melodic lead in the middle. I just used that track cause, clocking only 2:58, it shows how good MALEFICIO can go from one end to the other effortlessly. Their vocalist is usually growling his way into the songs, occasional clean vocals, as in ‘In The Name Of The Holy’, were performed by guest singer Rickard Yxelflod to hook the listener up with an intense execution and riffs aplenty that set the pace for this album. Another good example is ‘Entwined In Mysteries’, one of my favourites. Its slow intro riff has a pounding feel to it, using a melodic folk type lead that adds a lot of colour to the song. And then the middle section explodes into a headbaning riff with lots of groove. Production wise, it sounds unpolished in favor of a heavier sound, reminiscent of old MARDUK when they decide to go full speed ahead. I can’t really hear the bass, so maybe it was also left buried in the mix. But anyway, these guys know how write songs that never let you down. There are a lot of influences present in MALEFICIO’s music; all confirming the fact that these guys are great composers and musicians, And for sure, a band to follow, if they continue delivering such an awesome style of Death Metal. For all further info check out: www.myspace.com/maleficiotheone, www.apollonrecords.nl