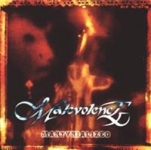 It’s weird that this Portuguese four piece is still pretty much unknown overhere as they already gained quite some attention in their homecountry ever since their origin in 1994. Their debut demo “Pleasure Of Molestation” sold the impressive amount of 1.000 copies in just seven months, while their first full length album “Dominion”, which followed in 1996 (after some delay from their original label Danger Records) , also received really good ratings from the media (even internationally). Lots of live shows were about to follow (a.o. with CRADLE OF FILTH, MOONSPELL, HEAVENWOOD etc.) and in 1998 MALEVOLENCE were even vo ted fifth best national act on a Portuguese radio show. Unfortunately the original line-up fell apart in early 1998, but Carlos Cariano decided to continue on with a completely renewed band. Maquiavel Music Entertainment picks up the band and the long overdue follow up “Materialized” gets recorded at Swedish Fredman Studio with producer Fredrik Nordström. The result is an impressive combination of atmospheric soundscapes with lots of brutality mixed in. In ‘Hunters Of The Red Moon’ and the album’s titletrack MALEVOLENCE partly remind me on newer SAMAEL, due to the similar vocal delivery and overall dark atmosphere, while the remaining seven songs are a nicely balanced mixture of powerful and melodic yet very brutal and always emotional compositions. The musicianship and production is top notch and the band extremely unique, yet very easy accessible. So, all in all this is a damn good offering with good chances to finally establish the band overhere as well.