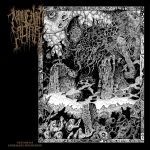 Houston, Texas. Home of warm climates. Cowboys. And MALIGNANT ALTAR. Death Metal isn’t really known for its large mass in Texas. But man, when it emerges, it emerges in spades. Their first album “Realms Of Exquisite Morbidity” is a beast. It’s a creeping, crawling, trampling monstrosity that works its way through the scorching desert heat to demolish everything in its path. Ex – OCEANS OF SLUMBER Beau Beasley (guitars) and Mat Aleman (bass) join forces with Joshua Bokemeyer (guitars), Wilson P (vocals) and Dobber Beverly (drums) to create some damn brutal music. Bells chime in, introducing the first track ‘Channeling Impure Apparitions’ which slithers and vibrates in its riffs. The vocals are a scratchy, gurgling mass of hate. The drums are bouncing off the walls in all directions. ‘Usurping The Pantheon Crown’ is a muddled mass of a creature. The guitars and drums melt into each other to form one bulbous sound of hysteria. ‘Belial Rebirth (Metempsychosis)’ is a staggering, swampy emergence into sounds that could chill a starving yeti. MALIGNANT ALTAR are simply power. They’re force. They’re might. And they continue their rampage with ‘Ceremonial Decapitator’ after a brief interlude in track 4. The guitars chug, the drums stumble along and the vocals herald in the coming apocalypse. Look, if you want artistic creativity, go chase down Ani DiFranco. Otherwise, enjoy the fucking torture chamber of destructive Death Metal arrayed before you. ‘Rite Of Krasue’ ends the short album with just enough perfection to not overstay their welcome. In and out. That’s what we need more of in this world of bludgeoning music. Nothing’s worse than a long-ass album that eventually loses its muster. MALIGNANT ALTAR know when to just fucking end it before any slipups. “Realms…” is what the plague doctor ordered. It’s what the king of hellions served up in its dripping ladle of doom. This album just goddamn made my day. And that’s all that any of us crave, really. For more info, check out https://malignantaltar.bandcamp.com, www.facebook.com/darkdescentrecords