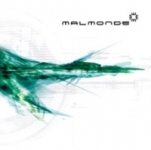 MALMONDE is a French band and they play a very synthetic form of extreme Metal sometimes referred as “cyber” because of the use of futuristic samples, heavily processed voices and a cold and distanced approach to music. As it is always the case with this genre, the boring factor comes into view not very long after the beginning of this CD. The shame is that the production is fantastic, very crisp indeed, but the music doesn’t follow. I didn’t hear the passion and the energy flowing here, and this feeling is reinforced by the mid pacing of almost all the tracks, these ones being tailored exactly on the same frame. The MALMONDE personnel seems to take all this too much seriously, in a very immature way. I don’t like their adolescent despondency to bleak atmospheres and sterile despair. And nothing becomes faster dated than this kind of “experimental” form of music. As the time passes, I see less and less interest in the whole extreme Metal scene (be it from Black Metal, Death Metal or Metal with an aggro edge in general), precisely because the formulas are always the same, nothing comes out to surprise you anymore. I forgot to mention the lyrics on this disc, I can assure you the French ones are really mediocre, with an obvious goal to impress the listener that ends to have the opposite effect. I don’t see the point for releasing this, a record doomed from the start really. MALMONDE tried to be very avantgarde with this, too bad their album sounds like a cross of New-Age music with the worse of RAMMSTEIN. Sorry if this review is painful to read, it only mirrors the vacuity of this album. Enough said.