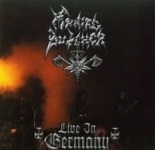 I contemplated the possibility to acquire some studio albums by this Czech band, and I regret to not have done it sooner simply because they have a special and fresh way to deliver their Black Metal. So I am glad to review this, a posthumous (the band unfortunately split in 2001) testimony of MANIAC BUTCHER’s live assaults. What we have here is a selection of tracks captured live during the 1997-2001 period, and could be seen as the band’s tribute to their German fans, because all the songs come from German shows. MANIAC BUTCHER deliver excellent Black Metal, in a raw and brutal form, very similar to what Australian bands like BESTIAL WARLUST, SADISTIK EXEKUTION or ABOMINATOR made us accustomed to, with a very light touch of Scandinavian flavour for good measure, more on the side of SETHERIAL and TRIUMPHATOR than anybody else in that matter. It is obvious that the MANIAC BUTCHER dudes have a strong Heavy Metal background, considering their way of playing, I doubt they ever relished on Techno “music” or pseudo-folkloric extravaganza. The production of this record is extremely good considering we face very underground shows, the dynamic at least is remarkable and serves well the wall of sound MANIAC BUTCHER inflict on us. All the tracks are not equally enjoyable, the 1997 track is pretty average, proving that MANIAC BUTCHER made some progress throughout the years, but always staying true to their old school roots. The funniest elements of this record are to me the intro of ‘A Song Of Black Ravens’ which remind me of PENTAGRAM anno 1973, and the fact the vocals evokes the mighty Cronos at his more demented moments. This is the kind of Black Metal I worship, devoid of any pretension to stardom and fame (we all know examples of such deviations) but rather based on the joy to play and to make people happy. So maybe it is time for all of us to support MANIAC BUTCHER (even if they are now in limbo) by rediscovering their fabulous music. Check these Czechs (I know, I know, this is pathetic… but hey, I couldn’t resist!). Note that Akhenaten (of JUDAS ISCARIOT fame) handles the bass duties here. Highly recommended REAL Black Metal!