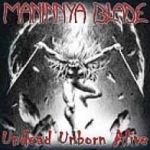 I have a lot of respect for what Armando Pereira does with Marquee Records… All of his classic 80s Metal re-releases always offer value for money, not only when it comes to the amazing packaging, but mostly also due to tons of extra material. So, needless to say that this also goes for the "Undead, Unborn, Alive…" 2 CD-set from Sweden’s MANINNYA BLADE again, which comprises of the band’s two full length vinyl albums "Merchants In Metal" and "A Demonic Mistress From The Past" (the latter being a collection of six previously unreleased tracks and 1984s ‘Barbarian’ / ‘Ripper Attack’ single), enhanced with two unreleased tracks (‘The Raven’ and ‘Religion’ from 1984 and 1995 respectively) and five live tracks from 2000 and 2002. 26 tracks in total, all of them digitally remastered and accompanied by the usual massive booklet that features the entire band history, all lyrics and a bunch of live pics from the 80s. The only problem here is, that MANINNYA BLADE by no means lives up to the quality or status of any of the bands that Marquee Records decided to (re-)issue previously. In fact I already considered them as a rather superfluous and average act back then and this hasn’t changed ever since. Especially the vocalist Leif Eriksson is bad beyond belief, so the only interesting aspect about the band’s primitive, straight forward thrashy Metal might be that Mikael Wikström aka Mike Wead (known from his later work with MERCYFUL FATE, KING DIAMOND, MEMENTO MORI, ABSTRAKT ALGEBRA, CANDLEMASS, MEMORY GARDEN etc.). played lead guitar on the band’s second demo and later resurfaced in the line-up, which lead to a name change into HEXENHAUS (a band that used to be a lot more convincing!). Collectors of obscure 80s Metal acts still might get a kick out of this re-issue as it’s undoubtedly perfect for what it’s supposed to be. More info at www.marquee.com.br or http://wildside.nu/maninnyablade/