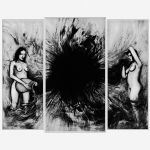 A good ten years ago or so, there was a lot of hype around Icelandic Black Metal, which really became the talk of town. Some of the music was quite good to be honest, though some of it has already been forgotten more than once. MANNVEIRA released a quite acknowledged EP in 2014 entitled “Von Er Eitur” where one thought that would get them a record deal, though apparently not. They appeared on a split with ELLORSITH in 2016 and since then it has been somewhat quiet, until Dark Descent Records started to market the debut full length from the quintet, an album that was recorded in 2018 / 2019, which now has seen the light of day. The music falls quite well within, what a lot of bands on the Dark Descent roster delivers. Dark and chaotic, churning quite unpleasant Death Metal intertwined with Black Metal or the other way around. The atmosphere is dense and drawing, a black vortex that sucks you in and keeps you haunted, even when the music stops spinning. The guitar riffing is quite simple, tuned low, with some drawing melodic patters going in and out, there is almost an ancient Norse Symphonic Black Metal feel over it at times. The rhythm section keeps it to the simple, though very effective side, great paceshifts, even though it is doomy and gloomy all the way through, there are some a tad lighter parts and smashers. The melancholic feel is deep and is especially kept by the longing and tortured vocal. Melancholic darkness, intelligent song writing, great delivery, it is a job well done when making songs around 8 – 9 minutes, that feels a lot shorter. The album needs some spins to open, at first it is all bleak and dystopic, though as you get into the layers, you’ll find the beauty in the darkness. Enter the night of the graveless souls: www.facebook.com/mannveira, www.facebook.com/darkdescentrecords