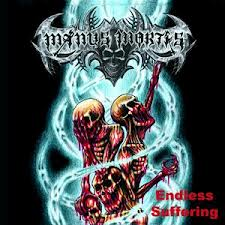 Ok. I know. This release isn’t a current one. But this review is a good opportunity to bring MANUS MORTIS back to your attention or inviting you to check them out, now. After a few years of silence this 5 piece form Backnang, Germany is playing shows with a modified line-up again and setting positive notes of exclamation with their powerful Death Metal music and live performances. Referring to guitar player Rouven, they are working busy on new material and will enter the recording studio soon. Until then, here’s a review of their last adventure in Death Metal land from 2004, entitled “Endless Suffering”. As mentioned before, the stuff here is a little bit old. But still not cold. On this 4 track CD MANUS MORTIS are presenting us a very well written and played version of melodic and melancholic Death Metal in the vein of bands like DEATH, AT THE GATES and early IN FLAMES / DARK TRANQUILLITY. As we like it. The production is a bit old-fashioned. Not that much powerful in all areas. Especially the guitars could need a bit more power. Don’t get me wrong, the production is ok. Nothing really to complain about. In my opinion the production is kinda charming indeed. It’s like listening to AT THE GATES “The Red In The Sky Is Ours” or DARK TRANQUILLITY’s “Skydancer” album. Everything’s 100% Death Metal capable, placed at the right spot and driven by the correct attitude. Maybe the producer (Hi Marcel) was a bit hesitant to crank up the volume of the guitars or the full strength of the 6-string performance got lost during the mixing. But we are still far away from IRON MAIDEN like circumstances. On the song ‘Das Schwarze Licht’ the band is singing in the German language, which sounds great and is convincing. But you better don’t read the lyrics or pay too much attention to the content. Friendly spoken the lyrical ejaculation is a bit childish. Next time better get influenced by Backnang’s most famous band TOTENMOND. They know extremely well, how to write decent German lyrics. Nevertheless “Endless Suffering” is a great underground release, which deserves your attention. A big plus is also the supercool gory cover artwork by Rouven. This guy knows, how a sick Death Metal cover has to look like. Homework very well done, mate. With all this back in mind, we should await a killer upcoming release from MANUS MORTIS. I’m sure, that they will knock us out next time with a more powerful guitar sound! \m/ Go and check them out at: www.myspace.com/manus-mortis, www.facebook.com/pages/manus-mortis/192333800846061