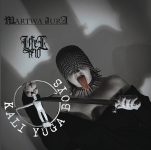 I am particularly fond of split releases. Buy one record and get two bands. A nice way of checking out new bands. The split release we have to deal with here features two Black Metal bands from Poland, YFEL 1710 from Olsztyn and MARTWA AURA from Poznań. Both bands sing in their native Polish language, but that’s about all they have in common. While MARTWA AURA are already around since 2010 and have released two full length albums and some splits and EPs, YFEL 1710 started just four years ago and have only an album in their discography yet. And the musical directions of the two bands are also quite different. The younger act YFEL 1710 prefers a more modern approach to Black Metal with their four songs. Sometimes groovy like in their opener ‘Zbieracz Ciał’‚ sometimes with slight hints on more recent interpretations of Metal like in ‘Wzgórze Totenkopf’. It’s only their final song ‘Poślubiona Zarazie’ that encroaches on old fashioned territory. Yet this final little highlight doesn’t make YFEL 1710 completely enjoyable, as they sometimes sound too confused in my ears. Thankfully MARTWA AURA are much more my cup of tea. The two longer songs from them are very old school with a hint on the Polish style of Black Metal. MGŁA comes to mind especially in the first song ‘Korona’. But also the second song ‘Możliwość Wyspy’ with its more gloomy basic beat and its epic moments can’t deny the Polish origin of MARTWA AURA. So these two songs alone are worth getting “Kali Yuga Boys”. As far as YFEL 1710 are concerned, I can only recommend them to maybe more open minded Black Metal listeners. You will find out more about both bands at www.facebook.com/martwaaura or www.facebook.com/yfel1710. You can check the label responsible at www.facebook.com/utsogp