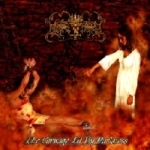 Another Black Metal band under the name MARTYRIUM. This one’s from Malta and the members obviously have some old CRADLE OF FILTH records at home! Their second album called “The Carnage Lit By Darkness” does offer other influences, though. Surprisingly, I made out some sort of modern brutal Death parts on ‘Androgynie Somnium’ and on the title track – somehow transferred into Black Metal spheres! Then, the keyboard player comes up with some calm stuff you might want to dance to. Not as crazy as ABORYM, though. It’s probably no big surprise as soon as one knows the keyboard player also programs the drum computer. Hell! I didn’t even realise they don’t have a drummer in the first place! Still, the band does play live. Six people and no drummer. Anyway. What I also like are the female vocals as they’re not as high pitched as one might expect. ‘La Marquise De Sade’ doesn’t try to pull my teeth. Thanks a lot! Therefore, “The Carnage Lit By Darkness” is a beautiful gothic Black Metal album with the necessary nasty edge to it and a love for details. Most of the (secret) early CRADLE fans will probably love it. At least I do. www.martyrium.net