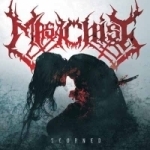 With members and ex – members of DECAPITATION, VADER and AZARATH, MASACHIST’s second album shouldn’t be a surprise for anyone. I haven’t heard their debut album "Death March Fury". Shame on me. Because "Scorned" honors and excels on the now deeply rooted Polish Death Metal style: razor sharp riffs, brilliant drumming and vicious vocals. Execution wise, these guys know how to play their instruments and it shows in every song. Both guitar players, Thrufel and Aro keep the listener interested bursting out gigantic riffs and blazing leads aided by Heinrich’s pummeling bass and Daray’s brilliant drumming. The production is also a highlight here, since everything is perfect in the mix. The album sounds a little raw on the edges and has a lot of dynamics; which is great, given today’s ultra-compressed mastering techniques. So, there you have it. "Scorned" is another great Metal album. But, on the downside, it doesn’t bounce too far from the other bands I have mentioned so far. Some songs are slow and pounding, like the opener ‘Drilling The Nerves’. The main riff on this one feels a little industrial or "math Metal-ish", but taken to another level. An then there are lightning fast numbers, as heard in ‘The Process Of Elimination’, which sounds like a steamroller going at 200 km/h. Overall, the band tends to focus on the mid-paced side and keeps the full on blast songs a few. Is this a good album? Yes. Is this a crushing release? Definitively! Is it original and fresh? Well, not exactly. The album has some hooks here and there. Even though it is impressive release, given the standards, it failed to leave a mark on me. I think MASACHIST needs more developing. One can’t deny the influences, but it would be great to have them move forward and try not to sound "that" similar to their country-mates. Anyway, "Scorned’ is 100% recommended and a must for any respected Death Metal fan. So, go ahead and support the band. MASACHIST is another great example of Poland’s brutal Death Metal scene. Info here: www.facebook.com/masachist, www.selfmadegod.com