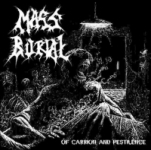 From Spain, the land of bull fights, we received a band called MASS BURIAL, which is presenting their debut full length album "Of Carrion And Pestilence" released through the famous Robert, owner of Wydawnictwo Muzyczne Psycho. What these Spanish dudes bring is a clear evocation of the ancient spirit of what Swedish Death Metal was back in the 90s, I mean, after spining the album for a few seconds you are transported back to the days when rustic crude and dirty Death Metal was the norm, with acts like early ENTOMBED, DESULTORY or THERION – these guys of MASS BURIAL seem to be strongly connected. I must confess that it took me several tries to find the charm of this band, but when you find it, oh man… it’s great… I mean… there is a tramp because you may think "wow another band playing the current trendy Swedish style"… but the truth is even when that may be partially true and MASS BURIAL lacks a bit of identity musically speaking, the work has all the elements to be considered as a pure Death Metal work… and well… at the end that’s what counts… isn’t? A highlight on this album is the 4th track which is precisely called ‘Mass Burial’… what a great tune for sure… the lead guitar solos are exquite… and the overall sinistrous ambience make this song the best one on the entire album. With a cool monochromatic artwork and cover exhalting the old school vein of the band, this album stands as a killer release that, if you are a Death Metal freak, you need to check out for sure… however, I’m really anxious to find out what is gonna come from these dudes because I don’t think this Swedish thing could be sustainable for so long… but while we find out what happens, all we can do is enjoy this work. www.facebook.com/pages/Mass-Burial/115395335235420, www.wydawnictwopsycho.com