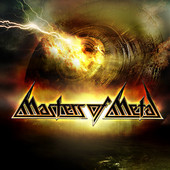 MASTERS OF METAL
Masters Of Metal
(No Remorse Records)
33:46min

Ex-members of AGENT STEEL, i.e. Bernie Versailles on vocals and guitar, Juan Garcia on 2nd guitar, Robert Cardenas on bass and Rigo Amezcua on drums, decided to continue under the MASTERS OF METAL moniker as there were some unsolved conflicts going on with AGENT STEEL’s original vocalist John Cyriis and the remaining members of the band, based on the use of the AGENT STEEL name in particular. In other words, MASTERS OF METAL is basically still AGENT STEEL, minus John Cyriis. Guitarist Bernie Versailles took over the vocal duties – and realizing the guy’s somewhat surprising potential as a good vocalist too, AGENT STEEL’s ‘new coming’ as MASTERS OF METAL, should make a plenty of old or new AGENT STEEL fans happy too. MASTERS OF METAL’s 1st outing, which originally was released on Krypto 9 Music in the States as a 4-track EP, also got the European release on the Greek label No Remorse Records, with additional 4 bonus tracks that are some old and renowned AGENT STEEL songs (recorded live in the studio in May 2013), having also Bernie Versailles on vocals in all of them. First off, what comes to the MASTERS OF METAL songs, listening to these 4 new songs you could still say like ‘hey, this sounds like AGENT STEEL…’ but a bit different this time what we have used to hear from them previously. Naturally both John Cyriis, as well as Bruce Hall, have always had lotsa to do with sort of trademark-ish AGENT STEEL sound due to these guys’ unique vocal performances on the AGENT STEEL releases but it’s still the twin guitar attacks of the known and skilful duo Juan and Bernie that have – at least more or less, underlined that specific AGENT STEEL sound they have had ever since the band was formed back in 1984 already. MASTERS OF METAL utilize some deep traditions in these 4 new songs on the EP how AGENT STEEL developed and refined their sound from one album to the other, just adding a bit more melodic elements here and there. However, in the end of the day deep inside MASTERS OF METAL is AGENT STEEL practically speaking, so the AGENT STEEL fans won’t be disappointed although they don’t get to hear either John’s or Bruce’s or Rick Mythiasin’s of STEEL PROPHET (who was originally aimed to do all vocals on the EP) vocals on this release. Bernie brings the best out of himself vocally too, actually sounding like he could have been a lead vocalist in a band for all of his life. Fast tempo tracks like ‘Chameleon’ and ‘Evolution Of Being’ fit best for his vocal style even if he’s relatively good at lower, more melodic sections too, in which he really has to prove himself as a singer – and he does just that. In ‘Lunacy’ Bernie gets some vocal support from both Sean Peck (CAGE) and James Rivera (HELSTAR), in which both gentlemen do their own shares really well as can be expected. Other than that, there’s this certain AGENT STEEL quality stamped all over the songs, the songs simply oozing richness of ideas when it comes down to fitting riffs, rhythms, vocals and stuff, into one solid wholeness. Count on MASTERS OF METAL they don’t fail at that either. As for the four remakes of some old AGENT STEEL songs, it’s also good to hear them with Bernie’s vocals, hearing his entire vocal range, and serving the old classics amazingly well. For me the absolute highlight out of these remakes of AGENT STEEL classics, simply must be ‘Bleed For The Godz’, sounding as tight, wicked and relentless fucker of a song as always, with Bernie’s ‘not-so-Cyriis-like’ vocal delivery. Nevertheless, it’s nice to have MASTERS OF METAL (or AGENT STEEL whatever you may prefer calling them) around and making new stuff. Up next, we all start enthusiastically looking forward to getting a full-length studio album from these LA Speed Metal merchants, right dear folks? In the meantime, try to get this No Remorse’s handnumbered digipak version (comes with a black/white logo sticker) directly from the label as it’s a limited run for 200 copies only, certainly becoming a collector’s item very soon. More about MASTERS OF METAL at: www.mastersofmetal.tv, label: www.noremorse.gr