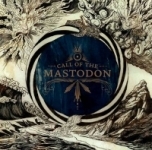 One of the most hyped and talked about Metal bands nowadays is definetly MASTODON (except in Germany perhaps). Their fluent, aggressive and convincing mixture of great 70s Rock à la THIN LIZZY and RUSH, riff monsters like old METALLICA (“Master Of Puppets” period), un-cheesy twin guitar melodies, intelligent rhythm-changes, a great portion of own ideas and a huge musical talent spreaded their name faster than it takes Godzilla to trample down Tokyo. Their superb albums “Lifesblood” (2001), “Remission” (2002) and “Leviathan” (2004) are milestones in the era of great Rock and Heavy Metal. They first caught my attention when I heard that ex-TODAY IS THE DAY whirlwind drummer Brann Dailor, one of the best Metal drummers I know, joined them and I was immediately blown away by their sound. They even impressed me more when they hit Berlin on last year’s tour and literally rocked the house! Coming to their new release: “Call Of The Mastodon” is NOT A NEW MASTODON ALBUM, but a re-release of their debut EP “Lifesblood” with the tracks ‘Shadows That Move’, ‘Welcoming War’, ‘We Built This Come Death’, ‘Hail To Fire’ and ‘Battle At Sea’. The album was remixed and remastered by the original producer Matt Washburn, artist Paul Romano painted a new great cover in the unique MASTODON style and they added four unreleased tracks: ‘Thank You For This’, ‘Deep Sea Creature’, ‘Slickleg’ and ‘Call Of The Mastodon’. It is hard to say when they created these four songs but I guess it was around 2001 / 2002, for the songs are quite more Metal than their newer more progressive songs are. The all over attitude is very aggressive, the sound is fittingly rough and you even get to hear some cool blast-parts. All combined with the great twin melodies, the crazy and hateful riot shouts and a lot of Brann Dailor’s tornado drumming. MASTODON is one of the few bands you just want to press the repeat button after the album is over! Even if you think you are not into this kind of music you should at least listen to one or two (or better more, for their music covers a wide spectrum) tracks to get your own impression, preverably from the fantastic “Remission”. And don’t think “hyped band” is exclusively negative: with MASTODON it has to be interpreted as: “well-deserved”. Check out the bands webside: www.mastodonrocks.com or www.relapse.com.