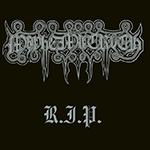 MAYHEMIC TRUTH is a duo from Germany consisting of Balor and Beliar. MAYHEMIC TRUTH disbanded in 2000 and continued as MORRIGAN. MORRIGAN started out in the same grim Black Metal vein as MAYHEMIC TRUTH was delivering, before MORRIGAN vent BATHORY Viking style Metal on us. The label The Devil’s Elixirs is from the Ukraine and is specialized in releasing out of print releases from yesteryear, which is quite cool as they are good at hunting down some obscure and great releases! “R.I.P.” was originally released on tape by Westwall as “1992-1994 / R.I.P.” in 2004 and contains MAYHEMIC TRUTH’s recordings, for what allegedly should have been their first album “My Morning Star”. The release was issued on vinyl by W.T.C. in 2007. The album is put together by some of the early demo tracks and tracks on the later, unofficially, released demo “Unreleased Trax” from 1995. I reckon the “Unreleased Trax” tracks were recorded especially for the album release, I’m not sure about the older demo tracks, even though the sound quality on this release is quite consistent. I have never grasped why the band never had an album or more released back in the days, as they did some very good music. Though an EP and some demos was the result of 8 years hard work, and perhaps the best German Black Metal around, at that point. Though I guess, with the name change in check, and as the first MORRIGAN album “Plague, Waste And Death” was pretty much in the same vein as MAYHEMIC TRUTH’s material, it might have something to do with label trouble. A direction, which a recorded and not released album also points in. I know the official statement from Balor is that the band never wanted a contract for a “real” album release, and the band split up due to Beliar leaving MAYHEMIC TRUTH. Nevertheless, the legacy the German Black Metal duo has left behind is enormous, and this release together with “In Memoriam” which was released by Iron Pegasus Records around the time the band disbanded and consists of the “Cythraw” EP and the “Demo 1996”, the legacy of MAYHEMIC TRUTH is now obtainable. Especially because “In Memoriam” also just have seen a re-release by The Devil’s Elixir. MAYHEMIC TRUTH was delivering the finest and most intense Black Metal inspired especially by early BATHORY. The darkness, sheer intensity, the raw grimness, and the guitar tone and style of production was inspired by the Swede. That together with the raw and “we don’t give a fuck” attitude from early VENOM. So a very fine example of early second wave of Black Metal, which would have blown everybody’s minds in the early nineties, if they had been from Norway or Sweden (have in mind MAYHEMIC TRUTH was founded and released their first material in 1992, before it all took off for real). Though that’s all in the past now, all we have left is the history and the music, legendary and more than worthy of a re-release! Enter www.facebook.com/thedevilselixirsrecords for the return of darkness and evil!