To me MAYHEMIC TRUTH always used to be one of the best, if not THE best German Black Metal act ever! And even though the members continued on in MORRIGAN after the split-up, the classic MAYHEMIC TRUTH material always remained really special to me. So, I was really pleased when Iron Pegasus Records put out the "In Memoriam" compilation album back in 1999, which featured MAYHEMIC TRUTH’s excellent 1996 demo along with the also hard to find "Cythraw" 7" EP. For some reason the band wasn’t really pleased with the way this release turned out and ended their cooperation with the label, so that the album’s availability became a little difficult over the past years. But Sweden’s I Hate Records finally changes this situation now as they took over the whole project and even added four additional songs to their re-release, which means that next to the aforementioned material you’re also getting the band’s complete "Promotape ’94" as well now. The layout got changed quite a bit as well: parts of it for the better, but also parts for the worse I must say. What I really appreciate is the fact that you’re getting detailed information about all of the three featured releases now, including pictures of the original coverart. There’s three different, individual pics within the booklet (including one of their former bass player Lilith) as well as a bandpicture on the flipside of the traycard, behind the CD in the crystal clear box. The thanx list got changed as well (it is kinda similar to the one in the new MORRIGAN CD), but all of that is not a big deal. What unfortunately turned out worse than on the original version is the actual frontcover art… I Hate Records did use the same picture for it, but the overall quality of it has suffered quite a lot, probably due to the lack of the original. While it originally presented us a stonehenge type silhouette in front of a yellow / orange glowing sky, the repro of it became kinda blurry, darker and more red now. The big black frame around it (which was also used as the background for the logo) doesn’t really increase the whole look in a positive way either. So, a completely different cover picture / art would probably have been a more satisfying solution here. But anyway, the music’s still killer and should easily please everyone of you outthere, who enjoys a perfect mixture of the epic BATHORY period, with an overall more dominant Black Metal grimness to it. Considering the timeless qualities of the band I certainly wouldn’t mind a volume 2 of this, with 1993’s "Son Of Dawn" demo and the "1992 – 1994 / RIP" recordings compiled… For all further info head to ihaterecords.cjb.net or www.morrigan.org. 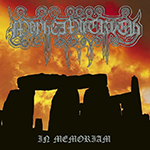 Here we have a reissue of the well known compilation “In Memoriam” from the German Pagan Black Metal band MAYHEMIC TRUTH. This is a collection of their 1996 demo tape and the “Cyrhraw” EP from 1995. This album was originally released in 1999 by the German label Iron Pegasus Records (and later re-released via Sweden’s I Hate Records – Frank) and now re-released by the Ukranian Black Metal label The Devil’s Elixirs, a name in the underground specialized in reissues of cult albums from the ’90s. “In Memoriam” is re-released both in digibook CD and vinyl format, without extra tracks and with the original Stonehenge cover artwork. Turning to the content, MAYHEMIC TRUTH offer to the listener ten tracks for almost 43 minutes of Pagan Black Metal. The whole atmosphere is imbued with an aura of epic and medieval darkness. Some tracks are more into traditional Black Metal from the ’90s, whereas other parts are more into Pagan and Viking Metal in the vein of BATHORY with clear voices, choral singings, keyboards, Folk instruments and battle samples. “Blood Fire Death”, “Hammerheart”, “Twilight Of The Gods” and “Blood On Ice” from Quorthon were for sure some strong influences for MAYHEMIC TRUTH when they composed this material. The sound production is perfect: raw as required by the standards of the genre and with a very obscure touch. The riffs are pretty catchy and fix perfectly with the voices, especially when MAYHEMIC TRUTH explore the Black Metal side of their style with a very aggressive and disturbing form of screamings. For example, if you take a song like ‘Morrigan’, you may think you’re listening to an album recorded by early MAYHEM with Dead on vocals. In conclusion, this is a solid and interesting album that marks the embryonic efforts of the European Black Metal scene from the ’90s to add a Pagan feel to the traditional sound. If you’re into old school Black Metal, BATHORY, ENSLAVED and the Pagan works of GRAVELAND, give a chance to this forgotten and underrated gem from the past. www.facebook.com/thedevilselixirsrecords