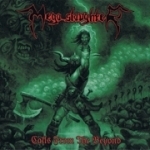 MEGA SLAUGHTER
Calls From The Beyond & The Demos
(Cryptorium Records)
98:19min

Back in the 90s there were many obscure Death Metal bands form Sweden that were abusing the standard Sunlight Sound or ENTOMBED / DISMEMBER guitar tune. I can recall AUTHORIZE, CREMATORY, HYPOCRITE and this one MEGA SLAUGHTER. Let’s say they were the “second line” of Swedish Death Metal, bands that were doing their own thing, but did not reach the success of the leaders of the scene. MEGA SLAUGHTER started as an evil Thrash Metal band with brutal vocals that were obviously the first step into becoming a full Death Metal band (with still a lot of Thrash Metal influence). Their only album was also released back in the day by Thrash Records which equals a rather poor distribution and a hard to find item. Many years later, the thieves and rip-offs at Arsenal Of Glory ¨Records¨ from Chile (a couple of low lives that gives the otherwise great Chilean scene a bad name) re-released it as a bootleg, so it is finally now 22 years later that Cryptorium Records is re-releasing this piece of dark and suffocating Death Metal in a massive 2 CD compilation, in an additional deluxe looking black box that includes a poster, a patch and a 44 pages (!!!) fat booklet with a great new (Joe Petagno) coverartwork (different to the cover of the box) and full of almost EVERYTHING imaginable related to the band… tons of flyers, pics, covers, zine clippings, liner-notes etc. A work, I must say it is that of a real fan, making it available to newer generations and to old Metalheads that passed up this the first time. So, is this effort really worth after all these years? Well, certainly the band even back in the day was not exactly doing something original or different, but it was well done and played with conviction. If I was to describe the sound circa 1991, I would have said that it take the most Death Metal elements of KREATOR with touches of POSSESSED and an overall aura reminiscent of a less technical MORBID ANGEL with a few solos recalling SLAYER with some of the most evil and cavernous vocals of the time. So, for collectors, especially the hard work put in this version, and that longing for the nostalgia of a very good band this is a definitive YES. BUT being more critical, none of the works of the band will ever reach the “cult" or “masterpiece” status, as it has been common use or might say abuse, naming any old school Death / Black / Thrash / whatever band from the 90s like that. Although the band plays, brutal and aggressive, many songs sound alike, there were better performers at the same time and many songs repeats on demo versions and the extra bonus songs are in the same vein which lack really any killer song. For the passion put in the re-release it is definitely worth buying… I can’t remember but I am sure I even got their demo from the band itself, so for me also nostalgia plays a role. Otherwise, it is 2013, listen and if it sounds good buy. At the very least give this one a chance. This still pisses on many of the nowadays horrible bands deforming the Death Metal name. For all further information check out www.myspace.com/megaslaughterswe, www.cryptorium.se