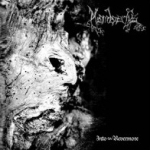 With so many sound-alike bands in this particular style, there really is no point to find the real identity of this act called MEMBARIS. There is none. And although not unlike Poland’s THUNDERBOLT, I will agree that yes they seem to be capable of playing their instruments and yes there is obvious musical potential on this CD. The underlying fact is that these skills and potential given here are wasted upon an over saturated, benign, and grotesquely popular style. Black Metal has been done to fucking death and then sum! I know there are those who see it otherwise, obviously a great number of you reading these contemptuous words here will equate it as so much written heresy or better said take my words as incitable blasphemy and keep recording and releasing this tripe, as I get bombarded with your trifling riffraff on a daily basis. However just because you happen to like IMMORTAL, DISSECTION and EMPEROR doesn’t mean you have to literally follow in their footsteps, putting your shoes within their boot prints to see if they fit do you? I wonder aloud if this continuance of plagiarism is a conscious trend of futility or finalization? Futility in the sense of your unwillingness to do anything different with the tools in your hands and ground rules already set before you a decade or more prior. The indifference in regards to your actual musical writing and conception, that appears to have incurred some sort of retarded paralytic affliction. That none of you can or will think on your own, to take this haggard genre to the next level, to create something new and / or at the very least create something that will stand for all time instead of just another fucking Black Metal CD ready to be cast aside as only so much noise. It is either this futility or it is a sign of finalization of those willful in the knowledge that they are indeed in some sort of survival mode, since many of the great firebrands of this style have either called it quits, have been incarcerated for life, or have taken their own lives, leaving the pack to fend on its own. A sincere indication that tells me the great Black plague is thankfully in its last throes. As without strong leaders, the pack will die, hence those that follow will eventually fall to prey, victims of their own, and what was once a strong and unified force will in turn collapse to be nothing more than scattered remnants of what shall never be again. Contact: www.membaris.de or www.articaz.com