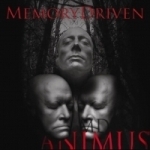 Starting under a DWELL WITHIN name in 2005, this Oklahoma-based slightly progressive and psychedelic Doom Metal / Rock band MEMORY DRIVEN keeps on getting good reviews from all over the world – and the reason for that is their 2nd record, which was released on the independent Swedish underground label I Hate Records in September 2011. MEMORY DRIVEN is built around vocalist and guitarist Dennis Cornelius; the man has a long experience in the Doom Metal scene all in all, having had stints in such act as REVELATION, PLACE OF SKULLS, DOOMSTONE (under a funny artist name, ‘Urinator Of The Holy Graveyards) – and so on. Dennis has also got a perfect pack of band mates for his band, to share his visions about how MEMORY DRIVEN should sound like: David Newcomb on bass and keys, Tim Mansfield (ex – HORSE CALLED WAR) on drums and Chris Greenway (ex – OVERSOUL, ex – SUBSANITY) on guitar, have created a well working unit together with Dennis, sounding innovative and trying their limits in terms of giving a true face for MEMORY DRIVEN’s soulful and moody Doom Metal / Rock. There’s a plenty of great moments within their songs on "Animus", but at the top of everything they seem to be every time when they set up themselves for those moody and melancholic moments that this record offers a couple of truckloads as a matter of speaking. Instrumentally, these guys are top-notch in everything what they do. A cool example of the guys’ true instrumental skills is presented in an instrumental song titled ‘These Aren’t The Chords You’re Looking For’, which starts off with massive wall of riffs, but slows down some moments later – just for introducing this more progressive and calmer side of the band. I really like David’s very audible bass lines in this particular tune; the man allows himself let loose with his tricky bass sections, while others create a nice backbone around David’s pounding bass bombardment. Then again, tasteful and melodic guitar parts that have been conjured up by both Dennis as well as Chris with their 6-string battle axes, are the most dominating element in the songs on "Animus"; not so dominating like they could eat up all the space from other instruments, but still relatively dominating nevertheless in order to catch the attention. Vocally, Jerry Cantrell’s (ALICE IN CHAINS) presence can be found from Dennis’ vocal performance – and somewhat easily even. Dennis can sing, and one needs no further proof for his singing abilities than just digging up this record from somewhere, and start listening to it. All in all "Animus" is so mesmerizing and variable wholeness, which should also appeal many others but not Doom Metal / Rock fans only. www.myspace.com/memorydrivendoom, www.ihate.se