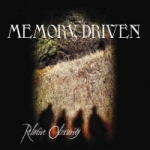 The latest development in the Doom world is wider latitude given to classic rock influences à la BLACK SABBATH and BLUE CHEER, and clear alternative rock style vocals. Bands who employ these techniques, such as VALKYRIE, enjoy a decent amount of success; for while it may appear as a recipe for disaster, there’s little that ever goes wrong, and MEMORY DRIVEN is no exception. The songs move slowly, but powerfully, as befits a Doom band. However, because Doom is as varied in style as any other genre, MEMORY DRIVEN may not appeal to fans across the board. They are not a CANDLEMASS or RUNEMAGICK clone, nor are they a SAINT VITUS disciple. They are, in many places, a tender heavy rock band not unlike what KATATONIA has become – by no means a bad thing, but this sound and style will not win as many fans as would something written in the CANDLEMASS vein. But fan grabbing should never be the sole concern of a band, and this band doesn’t appear to care who listens, which is great, and is more Metal in spirit than many bands are today. Great stuff. www.myspace.com/memorydrivendoom, www.ihate.se