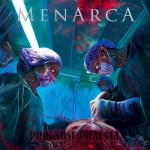 This Italian Death Metal band, that somewhat bizarrely takes its name from the first menstrual cycle of a young girl, took 9 years to release an album after their prior (and only) release, the "Heart Bleeding" demo. The first thing that caught my attention was the album cover, which very much follows the style of old Death Metal releases. The song titles, however, are all ‘Prognosi’ (1 to 8) except for the final track, a cover of MORBID ANGEL. MENARCA play brutal Death Metal, very fast and technical, not too far from bands like SUFFOCATION or HATE ETERNAL. And they do it with great competence and technical aptitude. They may not be too original (and hardly anything is, these days), but as long as the songs are good… which they are. The compositions aim for complexity, and after a violent opening track (which seems to have very little lyrics, for the most part it seems like the vocalist is only mimicking words), ‘Prognosi II’ presents a true technical Death fest, with the guitars going places, and great leads arising throughout the song. Throughout the album the vocalist varies his approach; usually he goes for the typical Death Metal aggression, but he experiments even with occasional Grindcore pig-squeals. The quality is kept at high levels during the whole of the listening experience, and if you are into technical, brutal Death you have a full dish to enjoy here; definitely recommended. In closing, MORBID ANGEL, who are clearly another influence of the band (hear those riffs at ‘Prognosi III’), are rendered homage via MENARCA’s interpretation of ‘Dominate’. Instrumentally quite close, the vocalist however goes for the unintelligible diction he had used in some tracks of the album, so that you cannot make out a single word. A very good debut. Check them out at www.menarca.it, www.facebook.com/menarcametalband, or their label at www.facebook.com/eyesofthedeadprods