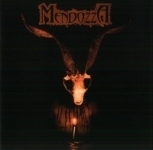 MENDOZZA come from Vancouver, British Columbia, Canada – and they play a kind of Doom Metal / Stoner Rock that always seems to get my ears flaming just for pure excitement. MENDOZZA have already released 5 full-length studio albums on their own, off which this self-titled 5th record in a chronological order, is also my first ever time to hear how they in fact sound like. This trio – saying this the humblest way possible, sounds somewhat amazing. Their sound is heavily rooted from the type of an ominous sound that made BLACK SABBATH a very unique sounding act on their early records – sort of giving them this very special, gloomy and dark atmosphere to be carried through from one song to another. These Aussies have managed to develop a sound for themselves that takes bits from here, and bits from there – and it all sounds like they have simply jammed these songs together within 2-3 rehearsal sessions only, just improvising a lot – and therefore even successfully gaining this pleasing but still sort of important live vibe and feeling into their songs on this release at least. Other than that, there’s overall lotsa warmth, crispiness and ever-blooming – positive infectiousness there in MENDOZZA’s sound that really embrace listeners’ organs of hearing. The vocalist and guitarist Deuce has similar grunting tone in his vocal approach to Paul Speckmann’s (MASTER, ABOMINATION, etc.) L.G. Petrov’s (on ENTOMBED’s later albums), fitting into the band’s sludg-ish Doom Metal sound perfectly in my opinion. MENDOZZA’s twist into things more sludg-ish, comes clear especially in the last song called ‘Wishful Drinking’. The song sounds seriously like they have been trying to put an end to the song after 3 minutes, without succeeding at it however. Hence this ‘prolonging sweet agony’ lasts nearly 9 minutes, making ‘Wishful Thinking’ the most lengthy song on the record. MENDOZZA’s 5th album turns out to be a stellar release nevertheless. Love it. Find more info about MENDOZZA at: www.mendozzaband.com