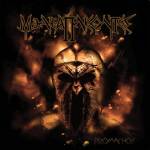 Greek Black Metal, which follows the traditions of old quite good, you can hear where the band hails from. Though the feel and atmosphere isn’t as the good olden days after all, the classic Greek gods of Black Metal as THOU ART LORD, NECROMANTIA, ROTTING CHRIST and VARATHRON had that special, evil and mystical atmosphere over the early music, that MENEAPNEONTES is missing, even though they utilize some of the same means, as the old hordes did. We get some good guitar melodies, and some good vocal peformance, I just miss some bottom and drive to the songs. They are a bit too fast to stand still and not really move. A guitar track more to get some more depth into the music could do wonders, and some real drumming, or better drum programming could also lift the release a lot, as the drumming becomes to simplistic and non-exsistant at times. MENEAPNEONTES has some good ideas, though is lacking in getting them through. I miss some drive, depth, flow and atmosphere. This release is as its best a decent demo, though it doesn’t have the quality as a debut full length release, and I actually find it a shame for the band, that it is being presented as that. Albums like this makes me, once again advocate for the great concept of demos, before releasing an album to the old grumpy masses. More information at: www.facebook.com/hmeneapneontes, www.satanath.com