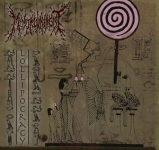 Usually, a band with a name or a cover art like this and titles like ‘I Love Kittens’, ‘Candy Crust Saga’ or the fabuluos ‘Under A Funeral Muffin’ (or ‘Panzer Division Muffin’) I approach with caution and of course humor. Well, I was right. This is a very funny form of Grindcore performed by a bunch of crazy Italians, that are not afraid to use Death and Black Metal as they want and mock everything. Well recorded and for what it is, well performed. If anything the band is obsessed by candy, so I sugget people suffering form overweight or diabetes to approach this with caution… but those into old TERRORIZER, NAUSEA and very fast Punk influenced Metal like early D.R.I. will probably find this hilarious enough to give it a listen. www.facebook.com/menstruophagist