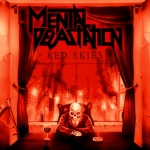 There must be some special vitamins and other exciting ingredients in the Chilean food and / or drinking water why this particular country always seems to produce so many skillful and great Metal bands – like almost every other minute or so (well, please forgive me if I didn’t quite get the facts straight by stating something like this, ha!). Such an act is a Chilean Thrash Metal act called MENTAL DEVASTATION that has been around since 2009 – and obviously now it was the right time to get this 4-piece Thrash act’s debut album out, titled "Red Skies". MENTAL DEVASTATION have nicely adopted a strongly Bay Area Thrash spirited sound for themselves; especially the kind of sound that one was able to hear on some early VIO-LENCE’s demos: frantic, aggressive, heavily riff-orientated and simply an ass-wiping Thrash sound that is about to cause some serious neck damages as a result of a continuous, heavy use. The songs on "Red Skies" hit its listeners like 50,000 mega-volts, going straight into your nerve center and making you go fuckin’ nuts. All the gang shouts that they do a lot on this album, are also done with a tasteful way, paying homage to some traditions of Thrash Metal how these gang shouts used to be done right in the past. MENTAL DEVASTATION bring back a slice of old school Bay Area Thrash spirit on "Red Skies", playing their songs on this record like they could actually play them live. This is some mean and aggressive sounding shit indeed – and if you don’t like this band, you simply cannot be my friend either. Fuckin’ Thrash or get t(h)rashed! More about these relentless Chilean Thrashers MENTAL DEVASTATION can be found at: www.myspace.com/mentaldevastation, label: http://metalwaysrecords.bandcamp.com